I was speaking to Simon the other day about spawn. Simon, I’m gonna use your name here lol. Anyway, he had hinted at redoing the spawn area. A whole new spawn building, a new nether portal area etc.

Spawn right now, in my opinion, is still very much rough around the edges. I’m not a huge fan of the current spawn area being the way it is now. There are a lot of unfinished builds that should either be completed or removed (e.g. Massive orange and white castle behind spawn building, Chinese metro(?), library, etc). I don’t have an issue with incomplete builds when they aren’t at spawn, but seeing half-built buildings every time you go to spawn just bugs me for some reason. Spawn is the first thing new players will see (we don’t really have any new people either), so we should make it refined and consistent, right-o?

Speaking of consistency, can we agree on a theme for spawn? We have a Chinese metro station, savannah trees, 18th-century looking marketplace, and an open air spawn building. If we remember the old spawn, it was all sort of the same. Honestly, I wouldn’t mind going for an Asian-themed spawn. I know Dr. Brooke has spent lots of time and resources building the metro station, and S4xor built a nice looking pagoda behind spawn. The library could be left the way it is, and the new spawn building is (hopefully) getting a redesign of sorts. The marketplace is far away enough from spawn to be left the way it is. I think this would be a perfect time and opportunity to make these changes before it’s too late!

The library could be left the way it is

The library isn’t even done yet; more windows to install (and maybe a roof to refine)…

I think the variety of styles would make a fairly good spawn, but we should have some degree of consistency and localized theme.

I have some plans for the spawn building and the area in front of the spawn building, and I’m planning on organizing something after I’m done with my semester and finals week. For now, we have a post office to plan and a clock tower to refine.

I think the variety of styles would make a fairly good spawn, but we should have some degree of consistency and localized theme.

Perhaps a more-or-less consistent color theme, with the varying styles?

If it’d be better, I can stop building at spawn. I totally understand if my sorta building style clashes with most others, it’s been a common problem. I definitely won’t take it personally.

Brooke, your build was coming out amazingly. It would’ve worked.

My finals start this week, and my ultimate final will end next week. Until then, we should think of things to put and organize at Spawn.

Simon I put a sign in at spawn, but I took care of the top floor of the spawn building.

I have a basic plan in my mind. We can work off of this. 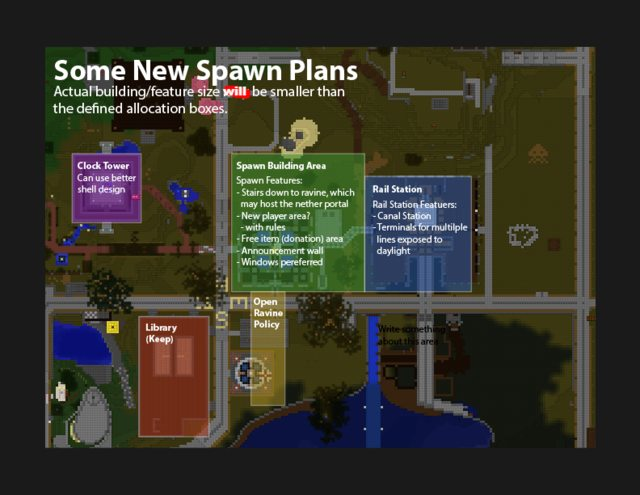 I know there’s a great image for a planned new terminal station, but I can’t find it again. The Arcane Central station will see a total renovation (under my lead).

Anyone willing to lead can take a lead for spawn building and maybe the “open ravine policy” part. There’s a ravine under the “ravine” part, and I imagine it better when unveiled.

Please add any suggestions or oppositions!

Oh and I’ll be redoing the farms and may add in a small villager farm? If that’s okay with the chunks, I have a break from school so I can be on almost every night to build.

plz dont demo the flag hut, that was a pain to make

I really like the idea of opening up the ravine around spawn, but the main focus at the moment should be tidying bits around so that buildings aren’t unfinished and parts of spawn do not look like such a mess. Also in some places paths need to be sorted out, they either lead nowhere or in circles. 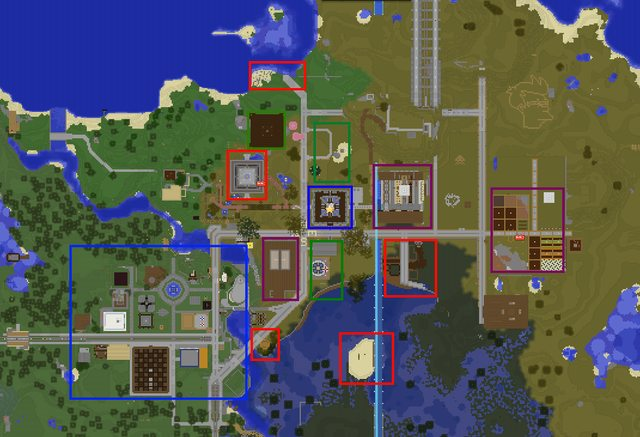 [color=#FF0000]The red areas I have highlighted are messy areas which need either tidying up or builds finishing, I have included the clock in this because I agree with others that it is in desperate need of a makeover.[/color]
[color=#800080]The purple areas are unfinished builds which I know are currently being worked on at the moment - so nothing much to worry about there.[/color]
[color=#008000]The green areas are future plans. As stated above, I am a fan of opening up the ravine, obviously this would mean the relocation of the nether portal and the flag building. The flag building could go in the areas just north of the spawn building and maybe the nether portal in the ravine. It’s important that the nether portal is quick to access from the spawn building though as I know is is some people main transport route. I have also included the pagoda here as I think the building should be adjusted to serve a purpose.[/color]
[color=#4000FF]And finally the Blue areas. I have highlighted the spawn building as I know Scozzar is working on this but not sure if the build is going to change or just the design, I know Simon has said above he has plans for the building but idk what that entails. I also have highlighted the market place. I know this isn’t as high priority as spawn but it too, needs to TLC. Just some tidying up and removal of shops which overs have abandoned will be fine.[/color]

To finish off just a comment on building styles etc, I like to see a variety of styles and colours but nothing should be too busy or too detailed to look out of place, if that makes any sense idk I hope you understand haha.

Hey Strypex, thanks for adding onto the discussion!

The thing is not every build at spawn needs to serve a purpose. If they all need to serve one, the spawn will not be complete.

I decided to scrap the ravine idea. It will not look good when the majority of the ravine is under another build. If anyone else has ideas, feel free.

The clock tower will stay unless the builder wants it gone, but gone or not, it really needs a makeover.

Aside those, the rest of the plan looks OK. As for the spawn swamp area thingy in front of the rail station, we should put a sign up and clean it last.

(DISCLAIMER: THIS IS NOT ON THE SERVER, THIS IS A SINGLEPLAYER WORLD)

I know you said you’ve scrapped the open ravine policy, but I already did a little bit of planning beforehand in singleplayer which I thought you might like to see, you might change your mind, idk. I have moved the portal into the ravine and the flag hut just behind spawn.

Apologies, you seem to have been displeased by my post. Like I did state, I had just done this on a whim before looking at your next response and thought it would be ideal to share for anyone else who was wanting to contribute to the discussion. I can see why the waterfall may look awkward to you, but I think there is plenty of other things around spawn which look equally strange. But yes I agree we must work around the areas which need work rather than setting out new projects at the moment.

No, no, don’t apologize! I would like to turn the area into a ravine, but I don’t want to destroy something someone values except in extreme cases.

I’m sorry if I came out to be annoyed or disrespectful. That was not my intent.

There’s some things in spawn that may look strange, but the waterfall one was just awkward since it’s not intuitively logical ._.

Actually @ollie1024, I really like that design. Waterfall looks pretty cool.
If we ever did that, I’d say lets turn the bottom of the ravine into a river leading into a cave/tunnel or something.

Though @SimonOrJ is right, for the time being we can’t do much with it as it is, with @greasy_bandit’s Flag Hut… Though personally I’d suggest we move that over to the Embassy District

We could use Schematica to simply move the flag hut from one location to another. That way it remains intact, just in a different location. The whole process will only take 10 minutes easy.

Thanks DLV, Glad you like it. That’s what I had done at the bottom of the ravine, but there is another raving which intercepts with it and leaves a big hole at the end, could be a bit of a problem but Idk.

Also, I’m not going to be able to join the server for a few months, I was in a house fire mid January and my computer was damaged, so hope to see some great things when I log on haha 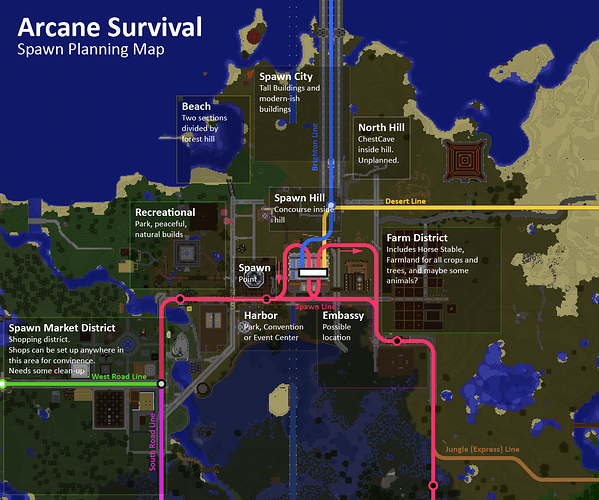 As the expansion happens, I may set up a subway that travels only around the spawn area.

I’d like inputs on some of the ideas laid out here.

~Simon
P.S. I was pretty tired when I wrote this, so I may have overlooked some things or misworded some things.

Edit: I forgot to mention, I also need some non-major road name candidates.